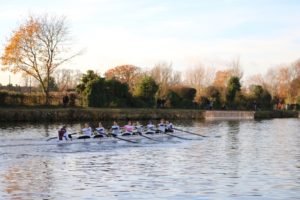 The start of a new academic year at Oxford means also the start of a new season for Boat Club. Keen new rowers, some with previous experience, most with no rowing background, gathered at the beginning of term for freshers’ events and decided to give rowing a go. While those who had rowed before were integrated into the development squads, the novices started training together aiming for the two regattas this term: Nephthys Regatta and Christ Church Regatta.

Only novices are eligible for the respective categories in Nephthys and for all of Christ Church, so this is a sparring between all colleges, everyone having started at zero. While all novices initially trained as mixed squad together, with the regattas drawing near the boats were set as they would enter into the respective events.

Nephthys Regatta somewhat foreshadowed the coming results at Christ Church a week later. With all races happening on a single day, the women’s novice eight made its way through four races, only losing in the semi-final against Wolfson, the eventual winners of the category. The men were slightly less successful with their racing being cut short after their loss against St Anne’s.

No novice regatta would be complete without carnage on the river, organisational nightmare, and last minute crew changes. After being very well behaved for all of summer and most of term, rain and river warranted a flag change on Tuesday of the regatta week, thus excluding novice-status coxes for Wednesday, Thursday, and Friday morning. At this point a ‘thank you’ to Toby Adkins and Henrik Hannemann for coming out of retirement and coxing the Merton crews on those days!

Academic commitments meant that the Merton novice men had to race as a ‘friendly’ boat with one senior rower and thus were barred from proceeding beyond round 2 on Friday. Another ‘thank you’ is due to Jaime Valdemoros-Gomez and Tom Lousada for substituting into 7 seat and making sure the men can race. The novice women appeared in the assigned lane again and again progressing through the regatta. Starting off with a win against Green Templeton A on Wednesday and leaving St Hilda’s A and University A in their wake on Thursday and Friday. Then on Saturday they beat in quick succession Green Templeton B, St Hugh’s A, and Keble A. The women’s final against New College was fought hard every inch up the Isis, but Merton defended their lead for the entire race to win!

Both men’s and women’s crews were mixes of JCR and MCR members who all displayed extraordinary commitment and talent for rowing. This is the Merton’s best performance in the Christ Church Regatta ever and hopefully presages success in Torpids and Summer Eights. Congratulations to all Merton novices for their accomplishments in Michaelmas Term.