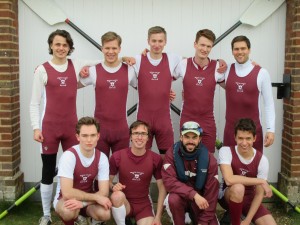 Only just back from the Christmas vacation, Torpids training started in earnest. With the crews selected, the 2nd Torpid boasted a wide variety of rowing experience from several years to having been roped into rowing merely a couple of months earlier. We had four weeks until we had to prove what we are made of. Despite a moody river, training progressed well on land, in the rowing tank, and on the water whenever the river level allowed us a proper outing.

Rowing On was the first time (and fortunately with hindsight the last time) we had to row over the whole course. With 3 min 7.5 sec the crew posted the second best time after Lady Margaret Hall II. With a solid performance and a clear aim ahead we went into race week, acknowledged as a very good crew, a force to be reckoned with.

On the first day, starting off bungline two, we caught up with Exeter II in the Gut, but also LMH II, who were marginally quicker than us in Rowing On, did not pose a threat at any point in this race. Having bumped to the top of the division, the sandwich race promised to be an exciting one. Before we had even reached Donnington Bridge, Wolfson III had caught up with Mansfield II while St Hilda’s I had already bumped out on St John’s III. The four crews starting in front of us had either bumped or got entangled. The Mansfield cox had not conceded in time which got the crew entangled and due to fantastic reactions from the rowers, hard rudder, and a bit of ‘hope and pray’, we managed to squeeze our eight through the gap and bump Mansfield II by row past.

After the exciting first day, we had to reschedule as we were now rowing in Men’s Division V. While lining up behind and being ready to chase down Wolfson III, yet again we were faced with crews plummeting down and others bumping out. With a clean side-to-side contact, we bumped Pembroke III who had started three places above us at the top of the Gut.

The plan for day three was rather simple: keep doing what we had been doing and bump the next crew in our way. On Thursday this was Worcester II who also had started three bunglines ahead. While St Hilda’s I had closed them down early before the Gut, Wolfson III bumped them at the beginning of Greenbanks which left us with a couple of more strokes until we had bumped them, too.

On Saturday everyone had one word in mind – blades. Having closed down on Wolfson III on all previous days but always having been denied the bump, we hoped to complete our task today. Unfortunately, once more another crew foiled that attempt, but bumping Regent’s Park in sight of the boathouses in the crossing made a glorious conclusion to a successful Torpids campaign.

Within six weeks the oarsmen came together and showed what committed training and a clear aim can mean: return to fixed divisions and gain blades while doing so!